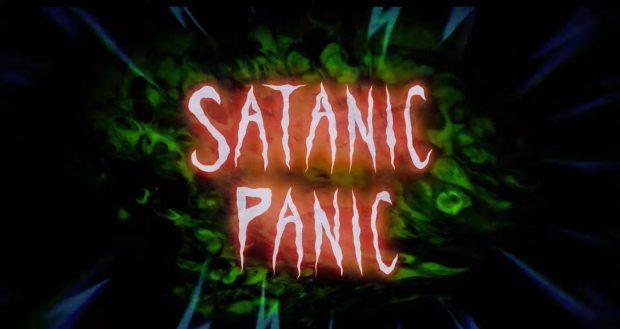 Would you look at that? It’s February. Again. I’m pretty sure it’s been a week since it was February last.

In the blink of an eye, we’ve reached Women in Horror Month. A time to celebrate creatives in horror industries.

I’ve been putting off watching Satanic Panic just for the sole purpose to watch it this February. And boy, that’s an awfully long time to build up anticipation.

This 2019 movie, directed by Chelsea Stardust, was co-written by one of my favourite authors – Grady Hendrix. There are all the hallmarks of a Hendrix story here: great female characters in charge, lots of gore, and a heck of a great villain.

Sam is a young woman starting her first day as a pizza delivery girl. And it’s a rough first day in the service industry. After being shortchanged all day, Sam volunteers to make a delivery to a wealthy side of town, hoping for a great tip.

As a virgin, Sam is the ideal replacement for Judi, the daughter of coven leader Danica, who lost her virginity in hopes of saving her life. The two girls team up together, hoping to escape the Satanists. The results are both disgusting and hilarious.

Sam’s fight against the wealthy Satanists is very Eat the Rich, which is a trope I love. There are some solid moments of sisterhood in this between Sam and Judi. I wish it could have been explored and developed more, particularly in the last act. I mean, nothing brings friends together like escaping a demon-raising coven.

I loved that this film had women calling all the shots. It’s a refreshing power dynamic to watch. Sure they’re all trying to kill each other, but hey – better than a man doing it, right?

Do remember that February is also Black History Month in the US (it’s in October here in the UK). So please practice intersectional feminism this month. Particularly uplift Black creators. I’ll be reading Tananarive Due’s short story collection, Ghost Summer as well as watching as many horror movies/short films as possible made by Black women. I have both Eve’s Bayou and Afterbirth on my list. Please send more suggestions!

I do agree with calls to move WiHM to another month of the year. This isn’t a new issue, but one that was obviously there since the initiative inception. Twelve years is a long time to be blind.