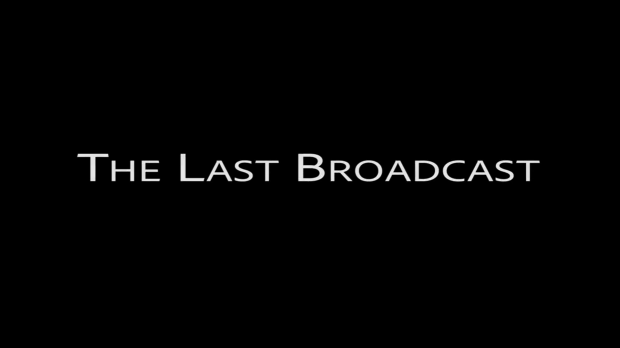 A couple weeks back I talked about how much I enjoyed Host but am dreading the inevitable half-assed copy-cats that will appear in its wake.

It’s a common thing in the movie industry, though. Something does really well, so that must mean we want 1,000 versions of it, right? The horror genre can be particularly bad at this: slasher movie franchises and countless reboots that no one wanted.

Now I had never heard of The Last Broadcast before. But inspired by our enjoyment of Host, my husband and I began looking into found-footage movies that we’d never seen before. The Last Broadcast seemed interesting to me as it appeared just before the mammoth Blair Witch Project was released in 1999.

In a number of articles I read, both films are blamed for copying the other. But in the early era of the internet, it would be almost impossible to rip the other off. Especially considering how long both took to plan then go into production. They were released within months of each other.

And frankly, at a surface-level glance, it might seem like the two are very similar. The Last Broadcast, like Blair Witch, follows a group of filmmakers chasing a myth in the pursuit of a story.

But in the early-era of the internet, this isn’t that surprising. We were only just beginning to explore what we could share online. Deah, mysteries and the supernatural must have been a hotbed for early geeks.

Blair Witch presents the recovered footage in an almost unedited form. But The Last Broadcast takes the Cannibal Holocaust route. We have the footage edited within a documentary.

This documentary is hosted by David Leigh, a bit of a Jonathan Richman but if Richman were an alien introducing a documentary.

David takes the viewers through the story of the murders of the crew of a cable-access show called Fact or Fiction. The show was presented by two hosts trying to track down the answers to their local mysteries. But while it saw initial success, it was on its last legs, desperate for attention. After an anonymous tip from an IRC (no idea what this is), they begin to investigate the story of the Jersey Devil.

The psychic, Jim Suerd, is the only survivor of the ill-fated journey into the woods. According to the edited footage, he’s erratic and a total con-artist. He’s also the most obvious suspect in the murder: he survived where his friends died, and the police find his clothes covered in blood.

But while David is seemingly convinced Jim is the culprit, Jim dies in jail under mysterious circumstances. Without the number one suspect, can anyone be certain who the killer is?

When David receives sent hours of footage from an unknown sender, he tasks a woman with correcting the footage for him. As the process carries on, we’re pulled closer and closer to the big reveal. In this documentary, nothing is quite as it seems. And we’re left with asking ourselves, “What really is Jersey Devil?”

And you get the answer. Sort of. Only the film gets a bit confused and doesn’t stick its landing. It commits a sin that I really hate in horror movies: when elements of magic or surrealism are introduced too late into the film, not matching the tone of the rest of the film (looking at you, Hereditary). It’s a shame it came out before The Blair Witch Project because it could have learned a lesson from that movie: sometimes less really is more. Leave it to the audience’s imaginations.

But I’m a sucker for a mockumentary. And The Last Broadcast is a pretty solid and enjoyable found-footage film. It’s pretty fun to watch the filmmakers utilize all new digital media, even if I didn’t really understand what was going on.

I can only imagine the story behind its making. It was supposedly made for $900! If anything, watching this movie only solidified the fact that the 90s were really trying new things. The decade doesn’t quite get the credit it deserves.