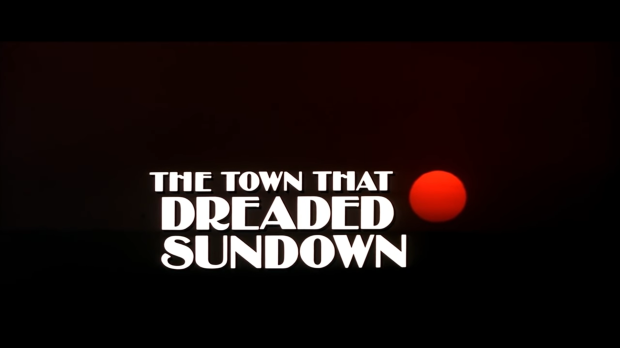 True crime fascinates people. We love it. It’s the reason why we’ve been obsessed with the likes of Ann Rule, Unsolved Mysteries and The Staircase for decades.

My recent not-so-lockdown lockdown obsession has been the My Favorite Murder podcast by Karen Kilgariff and Georgia Hardstark. The only way you haven’t heard about this podcast is if you’ve been living under a rock. For me, I’m so late to the game because I never really got into podcasts in general. Now I’ve got years of content to catch up on.

One of my favourite aspects of the show is the hometown murders where viewers send in their local stories. A story that caught my attention was a series of murders called the Moonlight Murders that took place in Texarkana in the 1940s.

And low-and-behold, I was absolutely chuffed to learn that the pseudo-documentary The Town That Dreaded Sundown was based on these murders. It was a movie I’d been putting off watching for ages, and it finally felt like the right time to watch.

The Town That Dreaded Sundown is done in the same style as director Charles B Pierce’s The Legend of Boggy Creek. There’s narration throughout the story that leads views throughout the scenes of destruction.

In the year 1946, the sleepy town of Texarkana is hit by a series of brutal murders. The murderer is a man donning a pillowcase on his head (think Jason’s mask in Part II) who likes to target young couples at lovers’ lane.

The case quickly becomes too big for the small town’s police force and a Texas ranger is brought in to help solve the murder.

The murders are all pretty monotonous until we get to a wonderfully bizarre and out-of-place scene where the killer wields a trombone/knife device! It’s completely out of left-field. But I suppose, if you’re going to be historically inaccurate your motto really ought to be, “Go big or go home!”

The real murders were never solved, and there isn’t much resolution here either. It’s certainly an interesting adaption of a true-crime story. Like The Legend of Boggy Creek, The Town That Dreaded Sundown tries to strike a balance between horror and slapstick comedy.

In my opinion, it doesn’t work very well here. Thankfully Vern Stierman’s narration helps pull the story back into its drama. I think The Legend of Boggy Creek worked better simply because I find mythical animals sillier than real serial killers. Also, there’s no banging tune in this one! That being said, I really do love the faux-documentary style that Pierce used.

Apparently, the film was remade in 2014 with loads of my favourite names attached: Jason Blum,
Roberto Aguirre-Sacasa and Ryan Murphy. The trombone is reported to have made an appearance. I’d certainly be willing to give it a try because, at this point, the true story of the Moonlight Murders seemed to have surpassed facts and into the realm of fantasy.