This month has been absolutely nonstop. So keeping up with writing has been a true struggle. Thankfully, though, it’s possible to squeeze lots of disturbing, hilarious horror into a thirty minute episode of Tales from The Crypt

Like most Tales from the Crypt episodes, the character at the heart of this episode is truly unlikable – and is in no way redeeming. That makes travelling cemetery plot salesman Judd Campbell an easy guy to dislike. He’s so smarmy and gross (played excellently by Ed Begley Jr), that you can’t help but root for his demise. I mean, one of his early lines is, “I said I loved you, and you dropped your little panties. It’s called salesmanship”

So Judd spends his time roaming the countryside, preying on the bereaved via the obits in the newspaper. He cons an elderly woman (Yvonne De Carlo) out of everything that remains of her money after her husband’s funeral.

After pocketing the cash, Judd goes to a second farm where he meets the less-than-gorgeous Ma and Pa Brackett (both played by Tim Curry). Both are seemingly smitten with travelling salesmen. Despite arriving at the wrong address, Judd is invited into the Brackett family to sell them plots in a (probably fake but most likely shitty) cemetery. The couple seem very willing (and rich), but they need to see the land first.

Judd somehow manages to convince them to pay upfront, so Pa goes into the basement with Ma for their money. When left alone, Judd soon discovers the body parts of other men – other salesmen.

After being knocked out, Judd wakes up handcuffed and on the Brackett’s couch. Ma and Pa disagree on how to best deal with their latest victim, but ultimately leave the decision of Judd’s fate in the hands of their daughter, Winona (also played by Curry).

When Judd awakens, he finally gets to meet Winona. She’s…not super cute. Certainly not to the “standards” that Judd holds himself to with women. But he tries to win over Winona and ultimately win his freedom.

Winona takes Judd to her bedroom where she arouses him. They then have sex (which Judd claims to be the most incredible he’s ever had). When Winona suggests marriage, Judd seems pretty smitten, but he’s completely won over when he hears the word “dowry”. A dowry that just happens to be buried in the Brackett’s basement.

Judd and Winona ask Pa (a priest, apparently) to marry them. The wedding goes forward, but when it comes to the vows, Pa refuses to take Judd’s handcuffs off him.

After an argument between Pa and Winona, Pa seemingly dies when his neck is snapped. Winona makes into the basement for her dowry, soon followed by Judd with a gun. With a hole in the floor of the basement, Judd assumes that the dowry is near. He shoots Winona and hops in the hole, only to find a cemetery plot certificate with his name on it.

“Death of Some Saleman” is a pretty comic episode. The sex scene is…a bit too much for me (it oddly verges on rape but…who am I to judge?). Curry is, as always, a maverick. While you can only tell that it’s the same actor by similar facial features, the make-up and Curry’s acting makes each character to different and vibrant.

It’s funny. It’s quotable. And it’s one hell of a way to spend 30 minutes if you haven’t the time for Motel Hell.

Has there ever been anything may it be a film or band or even book that you’ve read about that you knew you needed to explore further? The obsession grows without actually introducing your senses to the feast? Somehow, this happens probably more than most people would like to admit.

Yes, it is a bit unusual to write about a film I haven’t even watched, but here it is. 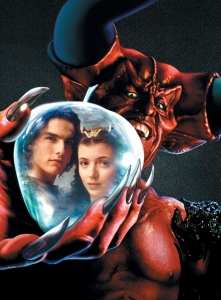 Lately, my obsession of things I don’t know anything about has grown with the 1985 Ridley Scott film Legend. The fantasy film stars a very young Mia Sara (Ferris Bueller girlfriend), a long-haired Tom Cruise and a rather devilish-looking Tim Curry. The film follows the young hero Jack (Cruise) as he tries to protect his love from the Lord of Darkness (Curry) and stop the evil lord from creating eternal night. Somehow pan flute and unicorns are involved.  Yes, unicorns. UNICORNS!

Only in the 80s, ladies and gentlemen.

I need to watch this film. Whether or not it is good has no real say in anything. I have decided it is definitely for me and I will like it. Now I love a late 70s to early 90s Ridley Scott. Having just watched Blade Runner for the first time, I’ve come to appreciate just how great he is. How this film has escaped being mentioned to me is slightly astonishing. Plus the soundtrack includes music from Tangerine Dream and Bryan Ferry.

This isn’t the first time a film has done this to me. For most of my adolescence I was obsessed with finding

a film with a man dancing with goblin puppets. Turns out the ballroom dance that haunted my 10-year-old dreams was from Jim Henson’s Labyrinth. I had watched the film plenty as a very young child. But pre-googling days it took a stroke of luck to find a film in a used movie store to bring the memories back.

I suppose this is why many films are over-hyped and often a let down. We read the synopsis, see the cast and crew and watch the trailer all before deciding whether or not something is for us. Usually some sort of opinion is formed before even being allowed to see the opening credits. More often than not things are exactly as we expect, but things can often be surprising. We might just like something we didn’t know was in our ‘taste’.

So Have you seen Legend? Is it worth a watch? Perhaps I’ll see it myself…some day.