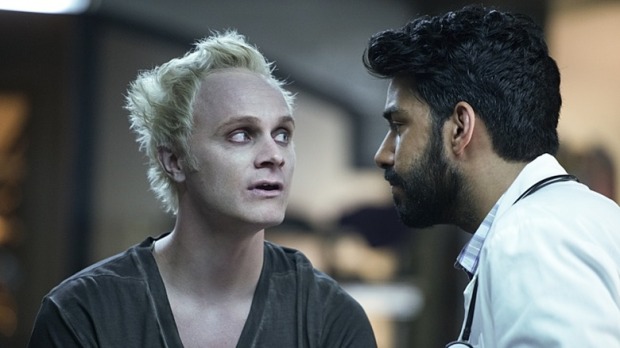 People love a good villain. They have to be charismatic and brutal like Hannibal Lecter or Hans Landa. It’s the reason why Loki stole the show in the Avengers and Thor films.  There are those characters that are so unlike us in our real lives, that we live vicariously through their terrible ways. They’re their most enjoyable to watch when they’re at their absolute worst.

By now, if you’re a reader of the iZOMBIE comic you know there aren’t too many similarities between the books and the show. Ancient mummy John Amon of iZOMBIE has been changed to Blaine DeBeers, the drug dealer and zombie. Both play a similar roles in the story – a place in between. A character who may be helpful, but is more likely to be totally evil. But as the season is progressing, it looks like Blaine probably isn’t helpful type.

But if viewers were at all wondering if Blaine could be good somewhere inside his semi-zombie body – all thoughts were dashed after Tuesday night’s episode, “Live and Let Clive”. It turns out he has been purposefully turning people into zombies to do his dirty work for him. There are in fact a whole load of clients that his minions are selling brains to. You do have to admit, he certainly has great entrepreneurial spirit.

His business includes making brains taste good and turning his victims into his new clients by selling them brains. He claims to be obtaining brains by digging graves, but instead he is prowling the streets killing former partners and picking off poor innocent victims. All of these horrendous crimes are done with effortless charm and banter by actor David Anders.

It is almost difficult to blame him for what he is doing. After all, it is Liv herself who decides not to help him out anymore by giving him brains from the morgue. There’s still plenty of his story to be told, and yet he is already a favourite. Why? Just look at the same reasons people were obsessed with a certain vampire named Spike (James Marsters).

They are so easy to love. And hate. A lot.

Both are so charming, charismatic and wonderfully evil (pre-soul Spike especially). Besides sharing a semi-dead state they even look a bit similar. According to an interview in Entertainment Weekly, Anders got in touch with Marsters to get tips on peroxiding hair. May the torch of Billy Idol looks be carried on.

Each clearly has a way of manipulating women. After Spike was left by Dru for a Fungus Demon, he latched on to the petty Harmony. Even though his thoughts were elsewhere, he dragged the poor girl around. Blaine works in a similar way. If a zombie is ever intimate it would mean turning the partner as well. He knowingly turns the unsuspecting Jackie after a one-night-stand, turning her into one of his highest paying clients.

What ultimately makes these characters so good is that they refuse to be one dimensional baddies. It’s difficult to judge Blaine too much by just the first few episodes, but if iZombie continues to go down a similar Buffy-path then fingers crossed that things get as complicated for him as they did for poor Spike. You want them to suffer, but deep down we’re still rooting for them.

Ambitious and bright Olivia Moore was living the dream. She was a doctor and had a fiance that echoed the heart-throbiness of Jake Ryan. It was all a charmed life, that is, until she decided to party. She attends a boat party to prove she’s not an “over-achieving pain in the ass” after her fiance begs the question ‘what could possibly go wrong’? Turns out, everything.

The CW’s newest show iZombie premiered Tuesday night, throwing in it’s own twist into a deep pool of zombie fatigue. But protagonist Liv (Rose McIver) is anything but the drooling, stumbling type. This zombie has the ability to take on the memories of the owners of the brains she consumes – and solve crimes.

The infamous boat party ends up being a breeding ground for zombies as many of the guests are taking a new, experimental drug. Liv manages to escape the madness with only a scratch, but it is a scratch that turns her into some sort of semi-zombie. She still remains herself to a certain extend.

She’s hair becomes a shocking white blonde and her skin translucent, and has about a much enthusiasm to not-live as the rest of the post-graduate world. Gone is the fiance, the life-saving job as a doctor and the long locks of brown hair. What Liz becomes is a coroner’s assistant with the same amount of spirit as the corpses she works on.

The entire cast that makes up Liv’s old “living life” is a bit…vanilla – like the ultimate yuppies. They’re a bit infuriating, and maybe not in the way they are meant to be. Instead of supportive, everyone comes off as a bit impatient, but mostly incredibly bland. They’re all completely oblivious to her new afterlife as a zombie as they attempt to stage an intervention thinking she has PTSD from the party.

Her boss Dr. Ravi Chakrabarti (Rahul Kohli) is quick to catch on to Liv’s unique diet, but allows to keep her on in hopes of helping her get her life back. But it isn’t until she follows Detective Babinaux (Malcolm Goodwin) to solve the crime of a dead escort who’s brains she ate, that she finds a new direction in life. One where she can use her er… “gifts” in a productive way.

The series is based on the Vertigo comic of the same name, and there are plenty of bits that reference the (excellent) original source work. At times it is a bit painful or unnecessary (like in the beginning of every scene), but it can also be fun. The homage works really works best in the opening credits, which retell Liv’s backstory in comic form. Interestingly enough, the artwork for the credits was done by iZombie artist and Madman creator Michael Allred.

There has been plenty written that Liv could be the CW’s next Buffy or Veronica Mars. But if that’s going to be true, she has a lot left to prove. If she’s allowed to stick around for awhile and find her footing, there is definitely potential for this show to have a solid fan base much like the comic itself.

iZombie could be fun, but if not carefully tended to could become another weekly snooze. McIver brings enough sass to keep Liv alive, and hopefully she will get the chance to do so.  The rest of the cast (I’m looking at you, boring family) are ignored or developed properly, this could be another show to put in the grave.

If you missed Tuesday night’s premier, the episode is free to watch on The CW’s website here.