People love to hate Adam and the Ants. Actually, there are plenty of anti-Adam Ant quips throughout music and it’s culture – especially in late-70s, early 80s punk. NME journalist infamously tore Dirk Wears White Socks apart and (incorrectly) called Adam a Nazi-sympathiser. And of course, another example being Captain Sensible’s single “Wot” where he ‘raps’, “Well, hello Adam, where you been? / I said a’stand aside ’cause I’m feelin’ mean / I’ve had a gutful of you and I’m feelin’ bad / ‘Cause you’re an ugly old pirate and ain’t I glad.”

According to an interview with the Captain in 2001, he just admitted that he couldn’t figure Adam out. Which is fair enough because Adam Ant’s music is strange and silly. But I do like a good dose of both, so his music with the Ants always worked for me. In fact, once it grew on me, I really love the 1980 album Kings of the Wild Frontier.

This album was released after Malcolm McLaren stole away the “Ants” from the band’s debut album, Dirk Wears White Socks. It’s a pretty well-known story that the band was essentially refurbished to be the band for Bow Wow Wow. This could have been a blessing in disguise as Adam procured guitarist Marco Pirroni, who still works with Adam – most recently on his 2013 album.

The US version of the album (which this copy is) includes two tracks instead of “Making History” – “Press Darlings” and “(You’re So) Physical”. This is one of those times where I think the US lucked out with a UK band release. And I can say with sure confidence that this album is pretty superior to the follow-up, Prince Charming.

If the whole concept of Vinyl Friday wasn’t pretentious enough, I have to say that the cassette version of this album is probably a bit more significant in my life-story than this vinyl copy.  I had a friend when I was in my high school days who had a pretty bad-ass car. Bad ass meaning it had a tape player, which was cool. My friend and I unloaded loads of cassette tapes on this poor girl, so we always had something great to listen to in the car.

I bought this album at the same resale store where the cassette was bought. For the longest time, I could really warm up to the band. For the longest time I only knew the title track, and I never warmed to it’s sound. But it was hearing the album in it’s entirety that I began to understand the band’s sound a bit better. They’re a lot more playful than “Kings of the Wild Frontier” would lead someone to believe.

This album sounds fantastic on vinyl. It’s obviously a bit of a battered copy, and it skips quite a bit but I still appreciate the sound all the same. But each time I listen to it, it reminds me of being young, howling along to Adam Ant in crappy cars in the back country roads of Wisconsin. 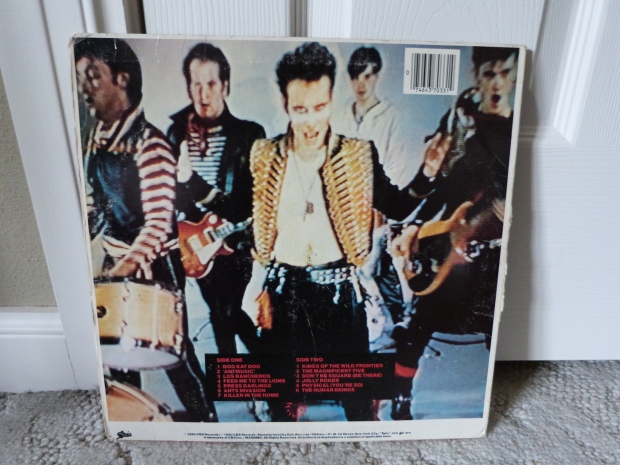