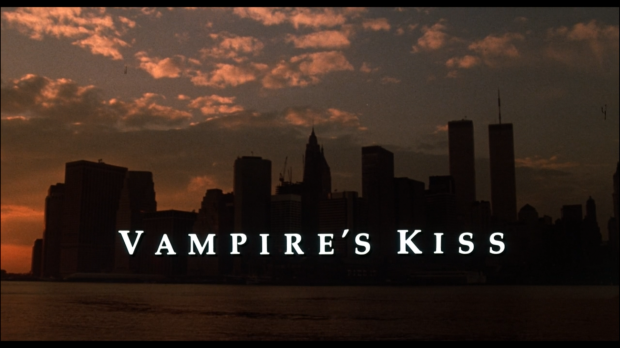 I have been in a BIG vampire mood as of late. Perhaps it’s because we can’t stop talking about Twilight at work for some reason. So when picking this week’s movie to watch, choosing one with a vampire theme was a no-brainer.

After reading through several lists, I landed on Vampire’s Kiss. It sounded great. 80s-era Nicolas Cage in a black comedy? Yes please!

Only I’ve been gravely misled.

Vampire’s Kiss is one of the most unsettling movies I’ve watched in a long time. Black comedy? Not really. Unless I’ve missed the punchline.

Cage plays Peter Loew. He’s a womaniser, an asshole, and a bit unwell. Peter spends his nights in bars and clubs, picking up women. One night he brings home a girl where they’re attacked by a bat.

At a therapy session, Peter describes that he felt somehow turned on by the experience. Not necessarily in a sexual way, but more of an awakening. Soon after, he takes another woman, Rachel, home. She seemingly bites his neck, turning him into a vampire.

As Peter believes Rachel continues visiting him for feeding, strange things begin to happen. He loses his memory and becomes increasingly more volatile. On the receiving end of this violence is Alva, a secretary at the literary agency he works at.

He continually hounds poor Alva for a old, missing contract. She’s tortured by his increasing obsession. But it’s clear that the obsession is not with the document, but torturing her.

One day Alva calls in sick. Peter stalks her by showing up at her address. He convinces her to go back into work by claiming he no longer cares about the contract. But when they return to the office, he forces her to continue the search until she finds it.

And Alva does find it. Peter, though, is less than pleased. He begins to chase her and later assaults her (and presumably rapes her).

Peter’s behaviour becomes even more erratic. He buys a pair of plastic fangs, which he uses to kill a girl at a club by “sucking her blood”. After killing the girl, he comes face-to-face with Rachel. Only Rachel isn’t a vampire. She’s very much a regular woman who has only met Peter once.

At this point, he begins to spiral even more. He begins seeing more hallucinations. He meets his dream girl, thanks to his therapist’s help (in his mind). But that soon disintegrates.

Meanwhile, Alva opens up to her brother about the assault. Rightly furious, Alva’s brother takes her into the city to take on Peter. The man, though, is very much gone. So when his death happens, it almost acts like it’s a blessing to him.

Vampire’s Kiss is incredibly heavy. In many ways, it reminds me of American Psycho. We can’t really be sure what is real and what isn’t. But we are certain by the end of the film that we cannot believe anything from Peter’s point of view.

I’m very confused by this movie. I wouldn’t recommend it. But I certainly want someone else to watch it just so I can vent.

Cage is very good here. Some people have complained that the character of Peter isn’t very sympathetic, but I don’t think that’s a bad thing. I don’t want to sympathise with him. While he clearly has mental health issues, we don’t need to feel sorry for him. Peter comes off as fundamentally a terrible person, with or without any conditions. Also he’s a rapist. I’ll pass on wanting to sympathise.

If you’re interested in this one, I’d go into this one with an open mind. Certainly don’t go into it expecting a comedy. But who knows, maybe it is very funny. Though it’s much more likely it will make you feel very uncomfortable and uneasy. If that’s what you like in horror, you’ll definitely find that here.

On a different note… Can I please get the vampire movie I deserve?