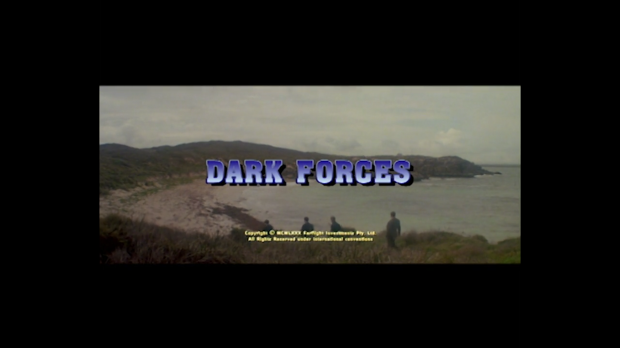 We rarely get a thinker here on Wicked Wednesday, but I’m happy to say that this week’s film is an exception to the rule. Dark Forces (as it’s known in the States, Harlequin in its native Australia) is perhaps more of a political drama than it is a true horror film. Despite being released in 1980, the film still plays on some very familiar, contemporary fears.

Alex is the child of a up-and-coming senator. On Alex’s 9th birthday, he’s a very unwell child with leukaemia. The boy is quiet at his own party, disappointed that his busy father isn’t around to attend. But a strange clown at the party is the one character that manages to bring a smile to his face.

Later that night, Alex asks his mother is the clown can attend his next birthday party. It’s clear from his mother’s face that there probably isn’t going to be a party next year.

Sandra (or Sandy) is also pretty unhappy. She has a husband that cheats on her and leaves her mostly alone to care for Alex all by herself. It takes most of her energy just to care for her son. So when Alex collapses the night of his party, it feels pretty damn desperate. But Alex’s doctor tells her that they have reached the point where any treatment will do more harm than good and refuses to authorise any more treatment.

Sandy refuses to believe the doctor, but in a flash of lightning, a man appears outside of Alex’s bedroom window. The man (dressed rather like a lost LARPer) tells Sandy that he can heal Alex. Sandy immediately agrees, as any sane mother would do… right? Her husband, Nick, is a bit more realistic and isn’t super thrilled with having a random lightning man appearing in his son’s bedroom.

But the man, Gregory Wolfe (Robert Powell), performs his bit of “magic” and manages to get the sickly boy to stand again. And with that, the magician disappears into the night.

Following the miraculous healing, the doctor tells Sandy that Alex’s health improving is merely temporary and that she shouldn’t get her hopes up. But when Gregory appears to her again, he tells her that the boy will feel good when he wants to. And so he does.

Meanwhile, Nick is getting himself into a political trap. One of the deputy governors goes missing while diving in the sea. The mystery begins to unravel as Nick gets involved in some rather unsavory characters. One of them happens to be a doctor who seems hellbent on taking down Wolfe.

Gregory’s relationship with both Alex and Sandy blossom quickly while Nick is out of the way. The magicians uses his talents to train the boy. He does fun things like dangle the kid over a ledge and teaching Alex to hum (a rather strange hobby). But Sandy falls madly for the man, perhaps to escape her sexless marriage or perhaps because Gregory Wolfe is kind of a sex bomb.

While Gregory and Sandra’s relationship grows, a cloud of inevitability begins to loom over them. One night, Gregory goes to Alex and tells the boy that “the time has come,” and if that doesn’t spell out DOOM in giant silver balloons, I don’t know what does.

Nick is having a party for the children’s hospital at their home. The guests are all eager to meet “the healer.” When the leather-clad LARPer appears, he performs a series of miracles and tricks that get increasingly sinister and mean spirited to spite the guests.

During the party, Sandy is urged by Mr Bergier, one of Nick’s staff, to go into the kitchen. There she kinds one of her maids, who is incredibly overwhelmed and claims to have been raped by Gregory. She’s sent off to take a bath where she accidentally pours acid on her head… like you do? Pretty obvious that Gregory gets sent down for that one.

Gregory is set down to jail for a time while the pieces are laid. Nick is approached by the doctor and several cabinet members. The show him information about Wolfe. They tell him that Wolfe slept with Nick’s mistress and that he entered Australia illegally. The men continue and tell Nick that Alex still has leukemia in his blood and that Gregory has been drugging the boy to make him feel better.

Nick takes the information he has been given to Sandra, who (even though her maid says she been raped and then got her skull melted in) doesn’t believe him. She takes Alex and their things and leave Nick behind.

But Gregory has escape from prison using his sweet-ass humming trick. When Nick returns to his study, he finds the magician in a harlequin outfit. He explains to Nick than the harlequin is a character only visible to its audience. He wants Nick that he is being groomed while being completely blind to the “truth.”

The senator has been killed to make way for Nick, who has a backbone as strong as a marshmallow. Gregory taunts Nick, telling him that the senator needs to make his decision about his future that night. Nick becomes frantic while watching Gregory’s intimidating tricks (levitating, the us’). Gregory makes a good mess of things in Nick’s mind. He tells Nick that the photos he had been shown were doctored.

But Nick seemingly picks the side of the government pals he’s made. He calls his mistress to confront her about her affair with Gregory, but the girl insists that she never met the man. The puppet becomes increasingly confused when forced to make a decision about what he thinks is the reality and which side is playing him.

The man’s indecision ends up with Gregory being shot multiple times. And while the magician gets up again, he is eventually shot again then thrown into the sea for some young boys to find the next morning.

It’s a rather grim ending to a familiar tale (if you haven’t caught on to the parallels between the Romanov family and Rasputin by this point, you’ve been sleeping, darling).

Dark Forces is one of the most usual, beautiful, and strange films I have seen lately. Trivia from various sites told me that the party of Gregory was originally written with David Bowie in mind, and it’s quiet obvious that it was.

Robert Powell is a true force in the film. He fills the roll of a charismatic, influential man well. It’s as though the film falls away and colourless around him. But while writing this, I even found myself uncertain whether he was truly someone to root for. But that’s part of what works for Harlequin – much of what it shown could hardly be real, so who are you to believe when everything you’ve been told you know is false?